We arrived in Seattle for the first segment of our hop, skip, jump journey to the Philippines and China Monday night. The hotel I got on Hotwire was the Cedarbrook Lodge near the airport.

We were VERY impressed with the hotel. As soon as the free airport shuttle drove up to the grounds we were delighted with the landscaping and building. Approaching the front door there was a little bridge over a little brook…..instant relaxation! We walked in and both said “wow..this is so nice!”

I think the word that summed up the Lodge was relaxing! It was very modern yet warm.

The check in staff were very helpful. They informed us that in each building there was a “living room” area that had free snacks 24/7. Water, drinks, candy, Hagen Daz Ice Cream…..all complimentary!  Wireless throughout the Lodge…complimentary!

After settling into our small but charming and cozy room….. 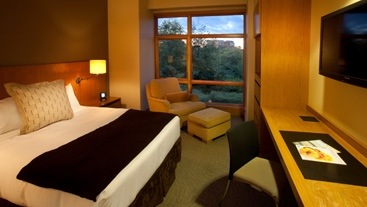 we went to the Copperleaf Restaurant in the main building. It was a delightful dining experience….and I don’t use the word experience lightly.

First came a deconstructed BLT sent out by the Chef to welcome you. Very tiny but such a nice gesture and very tasty. 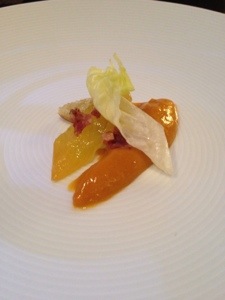 My first course was a creamy clam chowder. It was served in a very unique manner. They brought out a bowl with the ingredients that are in the chowder beautiful arranged in the bowl’s center. They said it was so I could see what was in the chowder and explained each item. Afterwards, she poured the cream portion around the centerpiece. An excellent clam chowder. 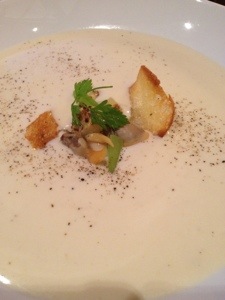 I didn’t want to eat too heavy before bed so I had the Hawaiian Blue Prawns which was listed as a small plate. Again, a very unique dish. Three chilled prawns with a cauliflower panne cotta. Interesting and delicious. 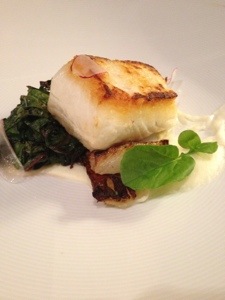 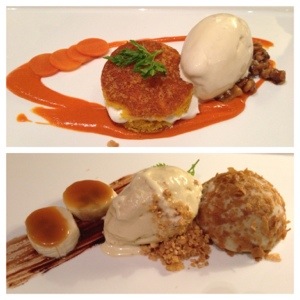 Everything at this place was different than I had ever experienced. I will let the pictures speak for that.

The next morning we had the complimentary continental breakfast at the Lodge. Passed the test as well.

We flew to Honolulu and went to eat at Roy’s. A Hawaiian Fusion Cuisine.

As soon as you sit down they bring you Edamame Beans. They were flavoured good. 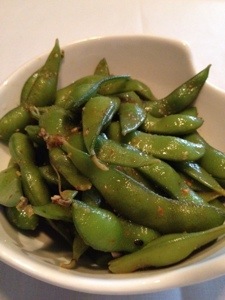 We had the Roy’s Fusion Menu:

Course one: 3 items from the appetizers

Course two: Main entree – I had Macadamia Crust Mahi Mahi – winner
Johnny had salmon….he said mine was better than his….that was okay because I had two pieces and easily shared one with him. 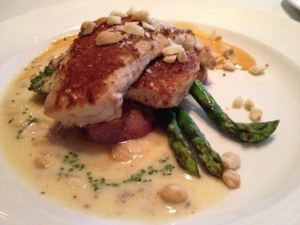 Like I said all we have done so far on the first two legs of this journey is fly and eat! One part of that is fun….and it’s not the flying believe me